Direct Action: PES, What Will You Choose? 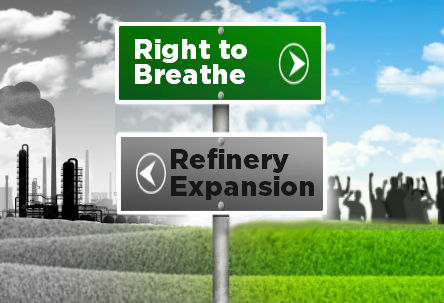 For the past several months we've been hard at work building the movement for the Right to Breathe. Now it's time to come together to take mass action. Mark your calendar: Tuesday March 22, 11:30AM.

PES is currently making moves to expand its operations, which is in conflict of our demand for a pollution cap. PES wants to build an oil port on the Delaware waterfront in an area of South Philly known as Southport. It will bring millions more barrels of oil to Philadelphia, putting our health, safety, and future at risk. PES is already poisoning our city - we won't take any more!

So on March 22, we'll give PES a choice: will they continue plans to build a polluting oil port, or will they support our right to breathe? We're asking PES to revoke its oil port proposal by May 7. If they don't, we pledge to take nonviolent direct action to reject their plans to expand.

These actions are based on the hard work of the Strategy Team, and feedback they got from those who were at the February 16th Movement Assembly.

Help us grow the movement: join us as we deliver the deadline to PES headquarters.

Actions you can take: Make sure to share the Facebook event, pass out flyers, and help build art and phonebank for the action (details coming soon).